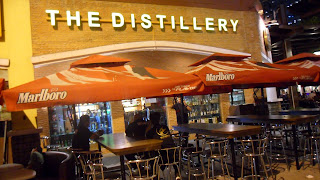 I always pass by The Distillery at the Forbeswood Heights Condo at The Fort but I never had a chance to try it out because when I am bent in doing so, they're always jam-packed. The place is teeming with Makati's nocturnal elites and office workers, binging with booze, and with neckties hanging loose as if trying to unweave from the shackles of corporate slavery.

Just lately though, together with our big wigs, we tried The Distillery Eastwood. Our group seems like a heterogenous melting pot of races, half of them are Caucasian and half of us are brown race. :)

These Finnish and German folks were so surprised because one bottle of Jagermeister and Russian Standard we ordered had just the price of one shot of it from their place. Damn, that expensive cost of living in Germany and Finland? 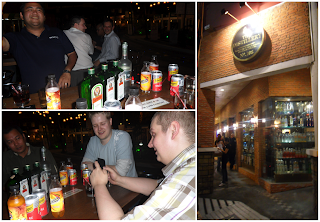 We surveyed bottle per bottle and we realized that yes, they are actually priced more wallet-friendly than most bars. We ordered Corona Beer, Russian Standard, Jagermeister, and Ginger Ale.

My only gripe though is that their customer service is not really of premium value. We asked the bar manager to have our two tables stuck together so we can condense ourselves into just one group but they refuse, giving a lame reason that Eastwood admin wouldn't allow it. I know that Eastwood admin will only not allow if they will exceed from the required occupancy perimeter to the activity center, which can only be done if places in linear vertical position. But we are just suggesting horizontal arrangement which will not at all increase distance. They didn't even think that the volume of our orders surpassed the accumulated volume of their other customers that night. Oh well, so much for the customer service.

One table is just good for 6-8people, exceeding that, your group will have to be separated. Compressing 8-10 would be a bit uncomfortably squeaking.

Next time, when in Eastwood, we'd better drink at The Gallery, Richmond Hotel. I wouldn't mind paying more for a better customer service.

Posted by cafémobility at 9:59 PM