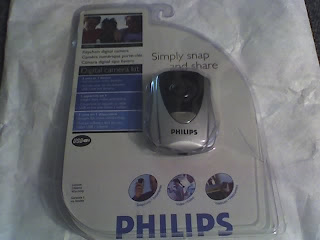 I'm a sucker for novelty gadgets. The first one I manhandled was a Vivitar magnacam, a kind of digital camera that poses as a binocular, so that when you're in an opera house that prohibits the use of digital camera due to the flashes that might vex and barge the performance, it can pose as a nondescript capturing device. That also make me a stern advocate of come-on cause when I'm walking along a mall with tiangge that displays novelty item in a vareity of tapestry.

Recently, a friend of mine handed me a camera that really titillate my gadget fetishes. It's a Philips keychain camera that proves to be an eclectic, ingenious way of fusing a keychain charm, a digital camera, and a camcorder, so handy that I brought it along with me in my business trip. Even if you haven't included it in your checklist, you'd mostly likely be bringing it since it poses as a charming conduit to your keys.

While not really an exceptional result as accomplished by a conventional digital camera, it does the trick of capturing precious moments at a fairly light travel. Here are few points to consider, and "capitalize" when using this nifty gadget:

1) One must have an ample light condition to be able to churn out decent pictures, otherwise it would appear a bit grainy and dark.

2) The highest resolution it can get is just 352 x 288 pixels, barely large enough for a web image. In low light (indoor light) you get horizontal lines accross the images. So again, make sure that you have sufficient ambient light. 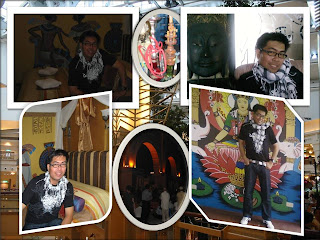 3) Since you don't have a screen to view the images on, you are really shooting blind. There is a tiny screen that shows two letters that you use to figure out what you are doing. The abbreviations though aren't very intuitive, unless you possess an uncanny photographic memory. For example, CA means delete all images. For self timer mode, it uses an "S" and a letter that is a capital E without the top bar. Confusing to say the least. It always pays to bring PDA phone to reference it with the letters. Kinda cumersome.

4) It makes use of Availasoft software to download the pictures from the camera. Like most software packages, it tries to install other programs on your machine like a photo album. The exemplary part is the software (called MyCam CIF) allows you to control the camera directly from the software. This allows you to preview what the camera sees on screen. You can capture a frame, and even shoot in video mode this way.

Now, you just don't have your keys along with you but your camera as well to snap moments that doesn't deserve to be fleeting. Never leave home without it.

Posted by cafémobility at 5:11 AM No comments: 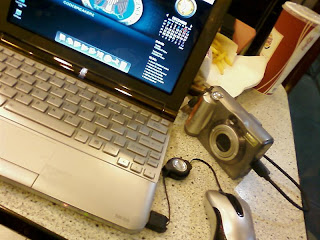 I don't know how much the camera have changed the way we live, as much change as the way it had been. Camera, once touted as apremium staple for the rich and famous, has evolved into a daily must-have's in the digital necessities.

Invaded by film during the early eighties, now it has spawned into a filmless(purely digital) technology with the advent of storage devices like flash disk and external memory cards(CF Cards, SD Cards, xD cards, etc). Now, shooting a subject can be almost seamless, almost as it still depends on the capacity of your flash disk. But if you're always brining your laptop, the limitation of shutterbugging can be highly scaled down to being-no-limitation at all, except for power depletion, as it solely relies on its portable battery to jazz it to life.

My earliest recollection of the myriad of conventional photography is through the use of Kodak Instamatic. But the technology is unstoppably raking with speed and rigor. On what has been a black-and-white photos(exemplified by the wallphoto of me at the middle and my brothers sandwiching on both sides) that I do have is now inspirited with full color and zest. On what was once a delayed appreciation after from lengthy rigging at the blackroom can now be viewed almost instantenously through its LCD preview. 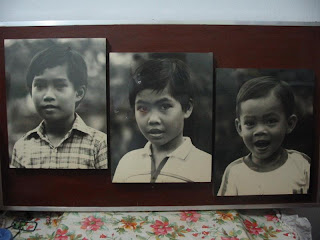 So much have changed. yet so much has to be learned too. Now there are a lot of things to consider, ISO setting, focal intensity, zoom ratio, aperture scaling, shutter speed, and a lot more can inevitably make your head dizzy, and with each shot that spells further hardware improvement, one will have to keep abreast in upgrading parts, making photography one of the most expensive hobbies around.

And now, with the chiming pity a friend feels towards me for having always had to borrow my brother's digital camera, he decided to hand one for me. Oh, the people aroound me are such angels. That will surely hone my composing eye for photography. Who knows, I will be holding a photo exhibit soon. Or my spectacular snaps might be featured in the National Geographic.
Posted by cafémobility at 3:11 AM No comments: