Exoplanets: Facts about Feasibility of Life

Man has always been fascinated by life outside our own, that is why most of the Hollywood concepts hinges on the fictional exploratory endeavors of looking for final frontiers such in the fames of Star Trek, Star Gate, and Battle Star Galactica.

In the onset, there has been a concerted effort to terrraform Mars.

Kepler Space Telescope for many years sweeps the sky with incredible "mass-distance" detail on possible planet that we can call close to our own, perhaps something we can colonize once we have realized interstellar travel. 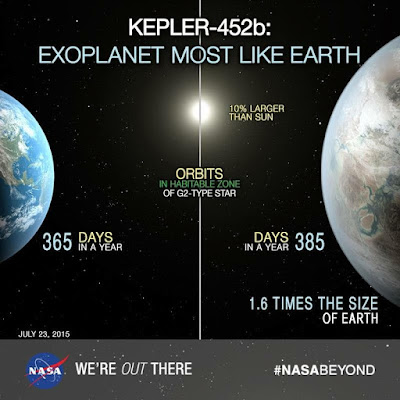 Yet most of Earth's twins aren't identical, not even close(or so we think). With close top 3,000 planet candidates under its hood, including those approximately Earth-sized planet and those planets within habitable zone from its parent star, we know that at the very least, by planetary size and distance ratio to our own, we are not alone.

In fact, there are a staggering 17 billion Earth-sized planets just within our Milky Way galaxy, but it takes more than the size to classify a planet as "Earth's long lost twin". We may have taken major breakthroughs in terms of discovery techniques but nowhere are we close enough to realize our ultimate goal: to find another Earth that can harbor life form, at least the same chemical ingredients as much as our own.

Even if it were the same as ours some 500 million years ago, that would be viable enough for a research funding. There are a plethora of possibilities though that life could grow outside our notion of life-formation models, which may be more common that that we know.

Let's look at our Sun first. Our Sun is a G Class star, and while we think that it is a common sight, we are all dead wrong. In fact, that class is 95% heavier than most of the typical stars out there which are M Dwarfs, the most common type, at about 3 out of every four star belong to the M category. Our oceans will boil a billion years from now, but M stars burn at a stable temperature for tens of trillions of years.

Why are we saying all these. It's because if we think about Earth's twin, we should first be thinking about Sun's twin first, a star that is roughly the same temperature, spectral class and age.

It takes time for life to develop and evolve into multiple celled organisms. That means we need a star that is also several billion years old. But we can't wait for too long because as stars age, the region of the core that fuses Hydrogen into Helium grows and ultimately thwarts off heat and raise the temperature of a planet, causing the surface water to boil and ending life in the process.

There are 200-400 billion stars in our galaxy and 7.6% of them are G class stars.  Just 10% of the 7.6% from the total star population are almost similar to our Sun which technically belong to the G2V star of the G Class star system. About 10% of G2V stars have the same age as our Sun, so the figure keeps on trailing down to s a slimmer value. Not only that, at the 25% of the stars that were formed about the same age as our Sun, 15% of those has the same metallicity as our Sun.

In total, that is just about 11 million stars in our galaxy has the same type as our Sun, same abundance of the heavy elements and same time to form complex life. But we haven't really take into consideration which of the elements are fewer as compared to others.

So out of the 11 million, how many could have harbored 'Earth twin' planets. For one, we need to have the same rocky planet, the same amount of water in its surface and the same distance ratio from its parent star. All of the three factors were inter-related.

The first may not be a challenge after all. If the central star has the right elemental abundances, the planets it formed should have the same density radius relationship just like our Solar System.

The problem is, Kepler isn't designed to extrapolate these type of information. So our best estimate is that, 4% of the Sun-like stars have the Earth-sized planets in the inner star system, and about 10% of those will have similar location much as Earth to our Sun.

In calculable hindsight, we are down to 45,000 Earth twins with same age, same elemental abundance and same orbital distance from its star.

To conclude, looking for Earth twin that has the same Earth life like ours may not be exactly like looking for a needle in a cosmic haystack, it's looking for the same kind of needle in which the numbers may be in rarity(considering our current set of technology).

Unless we're grossly wrong about our definition of life that it's not based on the same elements as how ours formed, then maybe we have to revisit and rethink our yardstick on how planets formed and how life evolved.
Posted by cafémobility at 10:13 PM